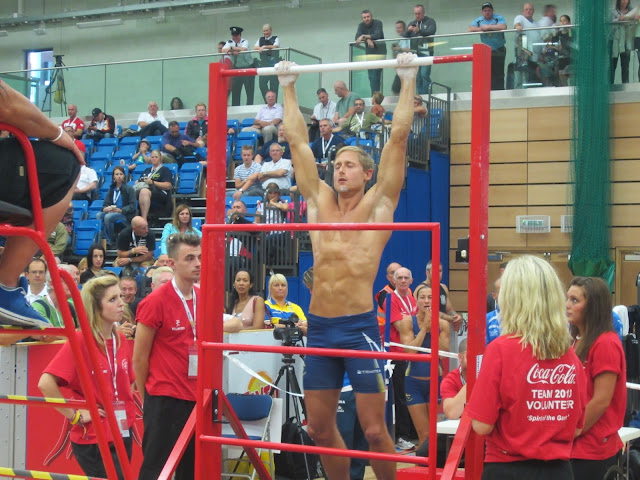 By Volunteer Nicci Gregg
Thursday was the third and
final day of the Toughest Competitor Alive (TCA) event and the turn of the
mixed doubles and 4-person teams to show off their various talents and skills
in eight different stages of the event which are as follows:
5k Run
100m Sprint
Shotput
100m Swim
Rope Climb
Bench Press
Pull Ups
Obstacle Course
With so many different phases
to this event the athletes taking part certainly need to be the totally package
with exceptionally diverse physical skills.
If you missed the other days
for the TCA event, check out Kat’s blog which sets the
scene for the first day where she saw the women and 50+ Men compete for the
highly sought after TCA title.
The day started with the
first three disciples of the event (5k run, 100m sprint and shot put) taking
place at the Bangor Sports Complex.  The
competitors then travelled by bus to the Bangor Aurora Centre to begin their
swimming challenge which is where i joined the festivities.
As I arrived at the Aurora I
settled in to watch the competitors doing their warm up for the 100m freestyle
swim race.  I sat amongst the competitors
friends, family and supporters and got talking to the brother of a member of
Team Spain who told me that his “brother has trained seven days a week for
a whole year for this competition and is going for the gold”.  This Spanish determination became even more
clear when the race kicked off as i watched three members of Team Spain win all
three phases of the swimming challenge, with Sweden following closely behind.
The spectator area at the
Aurora was filled with smiling faces from all over the world and encouraging
cheers in all sorts of languages, but when local man Roy Allen stepped up to
represent Team Northern Ireland the pool filled with cheers and few ‘Keep er
lit’ chants came his way.
The fastest time in the
swimming came from Fernando Felipe of Spain with a time of 1:08:80.
After the swimming
competitors, volunteers and spectators all made their way to the sports hall,
also within the Aurora complex to watch the rope climb, bench press and pull
ups, with the weight lifting competition for the WPFG also taking place in the
same hall the atmosphere was electric, not to mention loud.
First up was the rope climb
challenge.  Competitors had to climb a
20ft rope which had a disk at the top covered in black soot, the officials
check the competitors hands after the climb for black marks to ensure they
touched the disk, the fastest time wins.
All competitors took turns on two ropes, cheering each other on when it
was not their turn. I watched closely and once again noticed it may be a close
call between Spain and Sweden.  There was
only one female who attempted the rope climb, and I must say, she put the boys
to shame, you can watch my video by clicking here.
On to the bench press and
pulls up section of the day.  Competitors
took turns at lifting a weight which they had previously set for themselves and
for pull ups they had do as many as they could with their chin touching the top
bar each time.  Once again, Sweden stood
out to me here with Max Norwood showing off his determination and recieving
endless cheers from the whole crowd.  Local man Steven Morrison completed a total
of 29 pull ups and once again got the biggest cheer of the day.
At 2pm, the athletes,
volunteers and spectators made their way back to the Bangor Sports Complex with
the final challenge of the day ahead, the obstacle course.  Back at the BSC the spanish team entertained
everyone as they had brought their own portable iPod player and played
traditional spanish music while they did their warm up, this of course put
everyone in a fantastic mood, the sun shinning down on the field didn’t hurt
either.
The obstacle course consisted
of, monkey bars, tyre steps, wall jumps, net runs and many other things (these
are not the official terms, but its how I can be describe it).  The course had a gladiator style about and
believe me, these athletes certainly are like gladiators.
One by one the competitors
took to the final stage of their busy day for their last chance to be named the
‘Toughest Competitor Alive’. Here are the results.
My next and final event will
be the Ice Hockey on Friday night, stay tuned for my final blog.