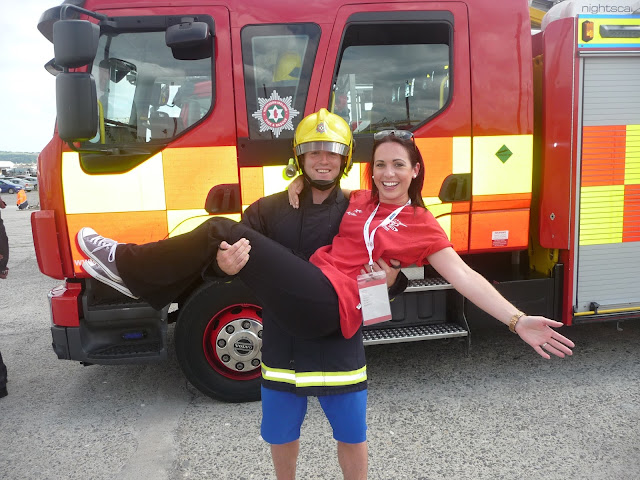 By Volunteer Zoe Cunningham
Given the buzzing carnival
atmosphere more often seen on the streets of Rio, the sun shining high in the
sky and the exuberant cheers of the Brazilian team as they were awarded the
first gold medals of the day, you could be forgiven for thinking you were anywhere
but Belfast.  But yesterday us Norn Irish
folk held our heads high as we welcomed the world to the third and final day of
Ultimate Firefighter at the iconic Titanic Slipways.
Once again the crowds flocked
from near and far to soak up the atmosphere at this thrilling event, which on the final day took the form of four different stages, performed by four different team
members.
The morning saw competitors
complete stages 1 and 4, the hose task and high rise task and the afternoon
session included the stage 2 weight and strength task and stage 3 obstacle
course.
Once again these amazing
athletes showed off the everyday skills they need to be firefighters to
perfection and much to the delight of the assembled crowds, the competition was
fierce.  It was split into age categories
and while many teams were from particular countries or stations, there were
also a number of teams made up of individuals including the Barbarians team of
Irish, English and Americans who ended up taking gold in the over 45’s
category.  Gold medals also went to the
Brazilians, who I’ve heard were in training for the games for the past six
months and a team from the Czech Republic.
A talented team from Ireland were awarded silver in the U35’s category,
cue rapturous applause from the huge crowd that had gathered for the medals
ceremony.
As the competition drew to a
close I met Danny Ard, Crew Commander for Blue Watch at Central Fire Station in
Belfast, who was a great sport and let me fulfil my lifelong ambition of
wearing a fireman’s hat and happily put his heavy firefighting gear back on to
pose for some photographs.  While we were
perfecting Danny’s modelling skills he told me about meeting an older
firefighter the day before who has competed in the WPFG every year since 1985 and
said that in all his years taking part he has never seen the games so well
organised.  This is a statement I have
heard repeated many times during the past few days and it is a true testament
to the hard work and dedication of the many organisers and volunteers that are
so far helping to make these games a resounding success.
As my time as a WPFG
volunteer comes sadly to an end I can say hand on heart that it has been an
amazing experience and one I feel very proud and privileged to have played a
part in.  Judging by the atmosphere down
at Titanic for the last two days we have certainly made these games one to
remember and I hope that our legacy of hosting the ‘friendliest games ever’
will live on.
So that’s it, back to the day
job tomorrow where I’m sure I will hear about all the exciting WPFG duties my
fellow Coca-Cola colleagues have been completing during their time as
volunteers.
Over and out . . .