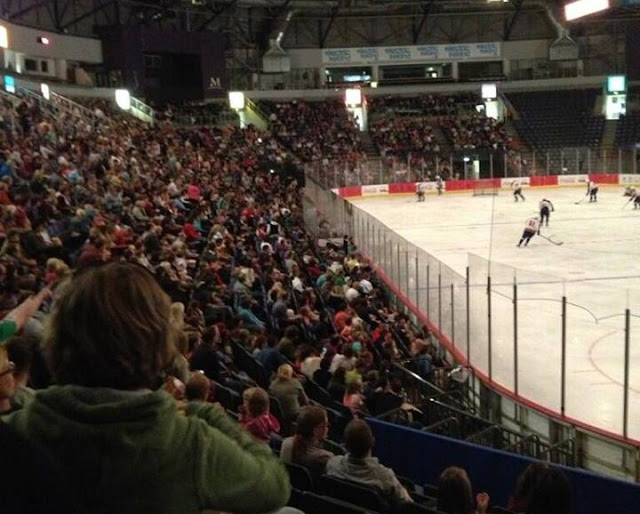 By Volunteer Nicci Gregg
On Friday night I made a new discovery about myself.  Ice hockey is, by far, my favourite sport EVER.  I am
ashamed to admit this but this was my first ever ice hockey experience, and what a first it was.
I arrived at the Odyssey Arena to watch the bronze and gold medal games for the +35 division.  As I entered the arena the competitors for the first match (bronze medal) were warming up , Canada RCMP were about to take on St Petersburg Dynamo.
As a newbie to the ice hockey scene I was a little clueless and no one told me that it may not be a good idea
to sit directly behind the goal net area.
As the Canadian team took turns to practice shots, the ones which missed
the net came flying towards me and crashed into the screen in front of me
making my heart stop a few times.  It was after this that I knew I was in for a good night.
After a swift move of seat I settled in to enjoy the game.  One of my favourite things about this event was the atmosphere, the arena was filling up with adoring ice hockey fans (over 4,000 attended, with some 50,000 spectators for the tournament as a whole!), music was blasting and everyone was in
great spirits, then the match began.  Ice hockey is made up of three periods per match, each lasting 20 minutes.
My first impression was, wow this is fast.  I literally could not take my eyes away for fear of missing something.  There was a goal attempt every minute from both sides.  St Petersburg were the first to score at just 17 seconds into the match which was followed by their second goal just minutes
later.  Canada came back fighting as they scored their first goal and quickly gained a lot more possession enabling them to eventually even the score to 2-2.
However, just 16 seconds later St Petersburg took back the lead scoring their third goal making the score at the end of the first period 3-2 to St Petersburg.
After a two minute break it was straight into the second period which was a little slower with Canada
scoring their third goal with 1.29 minutes left, evening the score to 3-3. This must have put some fire in their belly as they scored another two goals in the last minute of this period, bringing the score to 5-3 to Canada.
Going into the third period St Petersburg got their second wind and scored their forth and fifth goals,
putting the score at 6-5 to Canada.  With their competitors hot on the heels, Canada came back fighting with a memorable goal in the last 20 seconds of the match making them the bronze medal winners
with a score of 7-6.  The growing crowd cheered as the Canadian team collected their bronze medals.
Now for the match everyone was waiting for, the gold medal game.
Russian Home Affairs Ministry were taking on the Helskini Fire Department.  At this stage the crowd had
doubled and so had the atmosphere. The teams were brought onto the ice with music, disco lights and roaring fans.
The first period got off to another quick start with Russia scoring their first goal within 10 seconds,
holding possession they scored another three goals ending the first period in the lead 4-0.  It was very clear at this point that the Russian team meant business.
I was so impressed by the skill and speed of both these teams, the skating was excellent to watch and both teams had a great competitive spirit about them which made the match unmissable.
Into the second period Helsinki put up a great fight but were unable to stop Russia from scoring a
further two goals.  The shots from Russia were so powerful, lots of praise must go out to the Helskini goal keeper who stopped plenty of them, as well as the amazing defence.
The third and final period was excellent.  In true Northern Irish
fashion, the local Belfast crowd were fully behind the underdogs from Helskini, chanting their names and cheering them on every step of the way and when the team scored their first goal (bringing the score to 6-1) the crowd gave the biggest roar of the night so far.  The unstoppable Russian team continued on to score two more goals ending the period with a final score of 8-1.  Russia were victorious gold medal winners.
As i work for the ice hockey event sponsors Coca-Cola I was lucky enough to be given the opportunity to
present the silver medals to the Helsinki team who all gave me some lovely hugs
and friendly greets and i handed them their medals on the ice one by one.  Russia followed, picking up their well deserved gold medals.
I was amazed by everything at the ice hockey event.  The skill, the
speed, the referees who jumped over the puck every two seconds, the atmosphere, the crowd, the cold…everything.  This sport most certainly has a new super fan in me.
This is my last blog for the 2013 WPFG and It was been a great experience, I have met so many lovely people and so many talented competitors.  Until next time.