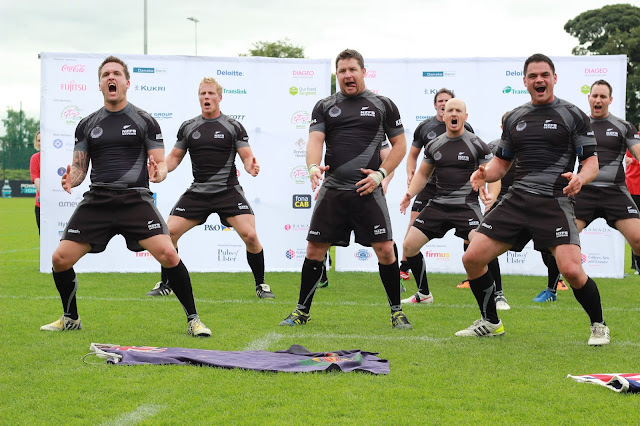 By Volunteer Rebecca McConnell
After two days Rugby 7s
action at Queens Sport (DUB), it was time for finals day to determine the 2013
WPFG men from the boys, and women from the girls.
All the matches took place on
the Arena, meaning the spectators could enjoy the match whatever the weather
under the roof.
It started off dry and warm as the semi finals took to the
pitch. After some tight matches and many tackles on pitch, North Vancouver and
Welsh Fire made it into the Division 2 final whilst Garda and PSNI won their
respective semis in the over 35s league. The Garda’s secret weapon were their
wacky socks as each member of the team sported colourful and unusual socks.
According to their coach “It’s to make old men feel, young!” A bit harsh when
the team is only over 35s!
There was drama during the
first women’s semi as the Ambulance needed to come on pitch to assist a
Canadian (East) player who took a bad fall during a tackle against the Garda
team. As well as St. John’s Ambulance volunteers coming to her rescue, the
Italians sent a member of their support team, an orthopaedic surgeon to have a
look too. Because of losing a player, the Canadian East didn’t have enough
people to continue the match, so the Garda won the semi. In the second semi,
team USA lost to Canada West. Later the officials decided to play what should
have been a Bronze medal match as a friendly.
Team USA took the bronze and Garda went on
to beat Canada West 33 points to nil. To say they were ecstatic to win gold
would be an understatement! They were loving it and even had the champagne
ready to celebrate on pitch.
Team USA had a PSNI officer
helping them out and she was delighted to go home with a medal.
“I wasn’t even entered two weeks ago so this is just amazing to have a bronze
medal at my home Games. I definitely want to take part in the next ones in
2015.”
The male Garda team also had
success beating local team PSNI in the over 35s final 41-5 to take another gold
medal with them across the border. Welsh Fire won division 2 title beating
North Vancouver Fire 38 points to 10.
In the men’s division 1
final, it was a close encounter between New Zealand Fire and HM Police Service.
NZ won the first try and despite taking a 17-0 lead at half time, their coach
still shouted ‘dominate’ to spur them on. They had won gold in New York Games
in 2011 so were keen to defend their title. In the end, despite resurgence from
the British Police team, New Zealand defended their title winning 17-14. Once
again, they showed their dominance and strength by performing the Haka to the
packed crowds at the DUB.
Logan Martin, captain of the
New Zealand Fire team, “Man we’re thrilled! We lost twice on the first day here
so it was good to come back and then peak at the right time. It was well worth
the trip to Belfast! It was awesome!” 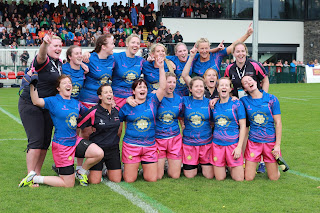 Awesome was a word I heard a
lot this week. It was the word a Californian used to describe her pre-Games
tour of Ireland, even in the rain, and it was the word I would use to describe
the spirit of the Games. As a fellow volunteer said to me this morning, “It’s
not just the competitiveness the games are played in that is so impressive, it
is the spirit. It is simply fantastic. In terms of the rugby, it is a fraternal
brotherhood across the world and it shows in the WPFG too.”
As I left Queen’s Sport, a
little saddened that it was my last shift with #wpfgsocialteam, the
celebrations for many of the teams had just begun at the bar inside. On driving
out of the car park, a guy in a Paris Fire shirt waved to me, he was looking a
lift back to his team’s hotel, because his legs were tired and sore. ‘Please,’
he pleaded. Naturally as a volunteer in the ‘friendliest games ever’, I obliged
resulting in me leaving not one, nor two, but three Italian fire men back to
the Ramada Hotel! They had all swapped shirts with each other during the Games,
hence the Paris Fire top. Unfortunately my iPhone’s battery was flat otherwise
that would have been a picture to treasure from the Games.
Failing that, I will
just have to remember the parting words from the guy in the back who when
getting out of my Seat Ibiza said, “Thanks, Rebecca. You’re perfect!” A
wonderful and unexpected finish to a brilliant and thrilling few days of
volunteering!