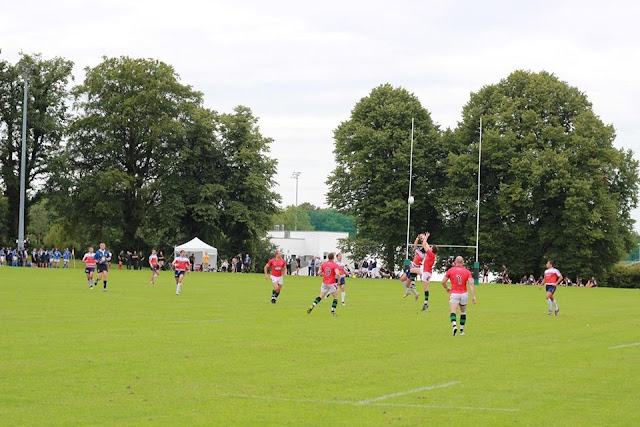 By Volunteer Rebecca McConnell
The sun was shining in South
Belfast today as rugby 7s action continued at Queens University’s DUB
playing fields. Twenty nine matches were being played on two different pitches
covering four leagues: men’s division 1, men’s division 2A and 2B and the
women’s league. Rugby 7s is played 7 minutes a side with 7 players on each
team.
Playing in the men’s division
1 were An Garda Siochana, British Police, British Prison, Paris Fire Brigade,
New Zealand Fire, Italian State Fire, Italian State and the local boys, PSNI.
Once again, the Haka was
performed by the New Zealand team each time they went out to play. It was quite
an intimidating performance and that was even before any ball was kicked!
Dame Mary Peters popped by to
watch some of the action as well as Kit Kong mascot of the official merchandise
sponsor Kukri. There were a lot of people watching with their kids and dogs and
everyone enjoyed the relaxed atmosphere and exciting action. 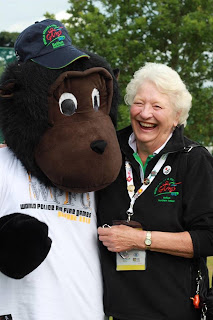 Some OAPs were
trying to bribe some WPFG volunteers to go and bring them some coffees during
the mornings play, even offering to buy them a brew, but there were no takers!
There was a chorus of Italian
‘Happy Birthday’ sang to one of their players post match. Tamburri Gabriel
shares the same birthday as tennis ace Roger Federer, they both turned 32
today!
PSNI played three matches in
total. They won against British Prison (17 points to nil) but lost matches to
British Police and the Italian State . A member of the team said,
“Competition was stiff today, some great teams out there. PSNI acquitted
ourselves well and we will come back stronger for the next Games in
Fairfax.”
Some of the organisers of the
next WPFG in 2015 were also in attendance at The DUB today to see help them in
their preparations. Keith Houston, a firefighter in Fairfax has been attending
meetings and checking out various sports with his fellow committee members.
“We’re having a great time in Belfast. We’ve been doing a lot of work,
sharing experiences and seeing what works well. We’re having dinner in City
Hall tonight so I am looking forward to that, it’s been hard going over the
past few days!”
I spoke with members of the
NYPD rugby team as they were warming up to play the Antwerp team in the
Division 2A. They were playing yesterday and beat the NYFD but suffered loses
to other teams. “The most important thing is we beat the fire department!
That’s all that matters. We’re having a fantastic time at the Games, the
traffic is much better here than in New York!”
In the afternoon, I took a
walk up to pitch 13 where the women’s rugby 7s tournament was being played. On
route, I passed by pitches where the WPFG Softball was being played. There was
something for everyone at the DUB today!
In action in the women’s
tournament were teams from An Garda Siochana, USA and two teams from Canada. I
did manage to find a local player, a member of the PSNI, but she was wearing a
Team USA shirt!
“It’s a funny story how
I got roped into playing here today. Basically, we don’t have enough players to
make a PSNI team but I play with Carrick and we wanted to have a friendly match
against one of the WPFG teams, so we set it up with the Americans. It was that
friendly, I don’t even remember the score, I don’t think we were that worried
about it to be honest, we were just getting on well and having a laugh.  When we were setting the match up, the
Americans needed another player for these Games and asked me would I step in.
It’s been great fun, the girls are super. Hopefully for the next Games, we can
pull together a team from the PSNI and the NIFRS and maybe double up with our
counterparts in the Republic for an all Ireland team.”
The Garda won all three of
their matches and go into tomorrow’s semi finals as the favourites. With an
Irish International player on their team, they will be hard to beat.
There is a lot to play for
tomorrow as the semis and finals of all the league tournaments will be played
on the Arena. Come along to QUB DUB playing fields, just beyond the House of
Sport, from 10am to see all the action!