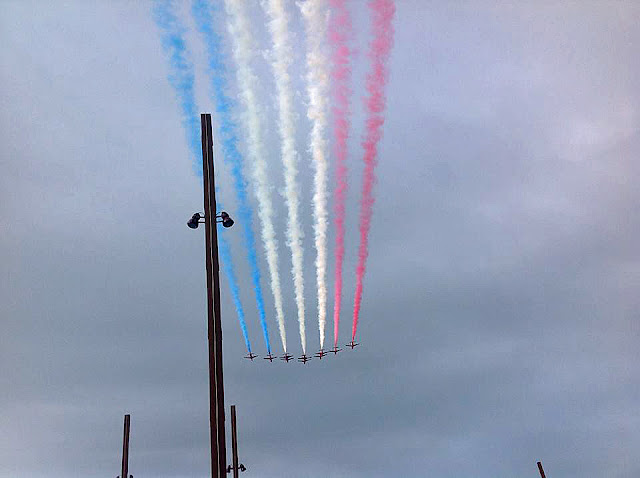 By Volunteer, Anne MacOscar
The atmosphere was electric
at Titanic Slipways on Saturday night as a huge crowd of athletes, family members and
volunteers turned out at the Closing Ceremony of the 2013 World Police and FireGames. A fantastic evening was had, celebrating the success of the Games,
reliving memories and officially handing over the ‘Flame of Hope’ to the hosts
of the 2015 World Police and Fire Games, Fairfax.
I arrived at Titanic Slipways
just before 6.30pm and already there was huge crowd gathering, everyone wanting
to secure themselves a good vantage point to watch the fantastic closing
ceremony which lay ahead. Despite the best efforts of the rain early on in the
evening, the people in attendance did not let the weather dampen their spirits.
Instead they donned the blue ponchos, provided by the organising committee, and
got the party started…and what a party it was!
Much to the excitement of the
crowd, The Red Arrows flew over the Titanic Slipways to officially mark the
start of the 2013 World Police & Fire Games Closing Ceremony at 7.30pm.
This was followed by the
parade of volunteers – representatives of the 3,500 volunteers who helped to
make the Games such a huge success. There was no doubt that during the parade
the most enormous cheer of the evening was for the home team, Northern Ireland. 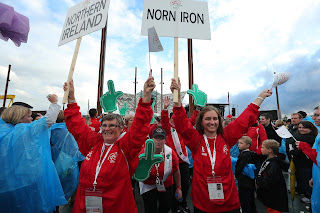 Throughout the ceremony, Sandy
Row Falcon Cheerleading Squad and the Open Arts Community Choir blew the crowds
away with spectacular performances, including a rendition of ‘What have you
done today to make you feel proud?’, dedicated to the volunteers. There was
also video footage of the volunteers hard at work throughout the Games and of
the Special Olympics Law Enforcement Torch Run team on their journey throughout
Northern Ireland, in the lead up to the Games.
When the time came for
Belfast to hand over the World Police and Fire Games flag to the hosts of the
2015 Games, Fairfax, Minister of Culture Arts and Leisure, Carál NiChuilin was
on hand to do the honours.
The Flame of Hope then entered the slipways, carried
by a Special Olympics athlete and a member of the Law Enforcement Torch Run
team. They handed the torch over to a representative from Fairfax and so its
journey to its new home began. It received a fabulous send off from the people
of Belfast, whose sadness that the Games were over was almost forgotten when
the 2015 organising committee invited everyone to Fairfax!
The Closing Ceremony truly
was a spectacular event to mark the end of the 2013 World Police and Fire Games
in Belfast. During the 10 days of the Games, medals were won, friendships were
formed, marriage proposals were made (4 in total!) and best of all, the people
of Belfast definitely delivered the friendliest Games ever! It was fantastic to
have been involved – wishing all the athletes, their family and friends and all
of the travelling volunteers a safe journey home.